I have not written about Axel lately, so I thought it was time for an update … 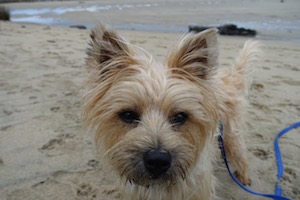 I was walking him the other day, (early while everyone else in the neighbourhood was still asleep), and I thought about our journey …

There were times, in those early weeks and months when I felt hopelessly out of my depth with Axel. I felt a complete failure. I felt like I had made a terrible mistake in even thinking that I could take care of, and teach a dog.

And as we walked the other morning, I could see how beautiful the journey has become.

He still barks like a crazy boy when someone walks past the house. But that’s okay. When I take him for a walk, sometimes there is another dog, ahead on the other side of the road (if it’s the same side of the road as us we always cross the road) and I can distract his attention with treats. He used to bark like a lunatic when he saw another dog, but now he looks at the other dog, and may strain on the lead a bit and make that early move to get excited, but on the whole he is more interested in the treats, and we walk on by. Afterwards he is a bit over stimulated for up to 5 minutes, so we continue calmly along our walk and he settles right down. And there are times when he sees a dog and does barks like a nutter, so I either quickly turn around, call “This way,” in a playful voice and start jogging, and after a few seconds he joins in—excited that we are running!! Or, depending on the circumstances, sometimes I pick him up and carry him. But, no longer do I feel like I have this out of control crazy dog. He has a right to say ‘hey I want to play’ or ‘hey I don’t like you,’ but it is up to me to be aware of our surroundings, and what is ahead, and to make sure he feels safe and is at ease.

Axel is very loving, and he is gentle with the kitten my daughter adopted. In fact, the kitten (named Bean—the name he came with) is like a little Ninja, and he leaps on Axel as Axel passes, and then they play together, they chase, the play fight, and Axel is so gentle with him. Sometimes, in the evening Axel will be lying on the couch, and Bean will go jump on him and chew his fur, and launch his playful attacks, and Axel is very patient with his little brother—though sometimes he will go and stand at the lounge door, letting me know he wants to go to the bedroom and have some quiet Bean-free time!!

During the self-isolation period, he has been patient. To start with we did not even leave the house, but then I returned to our early morning walks. After that walk we stayed home. I would toss his ball for him, which is his favourite thing to do! Other than that I spent time working on my laptop, reading, writing, tending to chores, or taking the time to rest and relax, and he would lie down on the couch, or on the floor not far from me, and sleep. He is content. He just loves being with his family. He’s not chewing things, or being destructive … he’s relaxed and peaceful.

Those are the qualities about him that have surprised me the most … his peacefulness, and how wonderful he is with Bean.

What is clear is, Axel is a very special little boy. 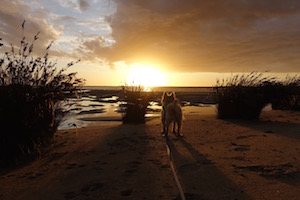 It has taken time. At 3 months I felt he had finally begun to truly trust me. At 6 months it felt like he now knew I was not gong to abandon him. It is now almost ten months since he joined the family.

I have devoted that time to our relationship. I have ensured he knows he is loved and appreciated. I have made sure he has a peaceful home, food, and a soft bed (mine!) to sleep on. At no point did he become that back yard dog who got shut outside and ignored. He’s part of the family, as are Evie (my daughter’s dog) and Bean the kitten. We are all family, and all of equal value.

Some people adopt a puppy, and when it ceases to be cute, they lose interest. I never knew Axel when he was a puppy. I adopted him as a 2 year old. Some people adopt a puppy and do not know how to teach him/her, and then they give up and assign the dog to the back yard. I had to learn how to communicate with Axel, how to teach him so that he knew what I wanted from him. And I had to learn how to understand what he was trying to tell me when he wanted something. Bono (Speaking Dog) encouraged me to observe Axel as much as I could, and learn from him.

I am so often reminded to never take Axel for granted, to cherish every day, even hour, every minute.

Our relationship has matured. I am confident with Axel. And I have also observed this: When I am very calm, very zenned out, he is too. In the evening when I watch a little TV (which I seldom ever did prior to the self isolation period), and am feeling very peaceful, he curls up against me—so does Bean. (However, never watch an aggressive show with lots of fighting if you want your animals—or indeed yourself, for that matter—to be calm!) When I am very calm, so are the animals. If I am stressed and anxious, their behavior reflects that.

I heard of one lady who was not happy because her dog would not come when she called him. The breeder and I were chatting and she wondered what had happened in their relationship to make the dog not want to come to the ‘owner’? What she noticed was that the ‘owner’ placed all of the fault on the dog, and took no responsibility.

Another person was frustrated because when they wanted to train their puppy he was really good for 5 minutes or so and then was naughty (in his opinion). The breeder told him to limit the sessions to 5 minutes. Any longer was just too much for the puppy—just as it would be for a human toddler. He was expecting the puppy to do as he commanded when he commanded … and the poor puppy was just a puppy, a baby.

Our relationship has to be one of mutual love and respect. If we want to teach them things, then small sessions, and make it so much fun, make it a game!

Panther was my cherished black cat, the coolest dude in the world. Until he was killed by a car in January, I would tell him, every night, indeed every day, that I loved him and that he was important to me and cherished. I say the same thing to Axel. I make sure he knows I love him, that he is important, that he is a member of this family, equal to any one else.

It has been an amazing journey with Axel, and I know the journey will continue to be amazing! 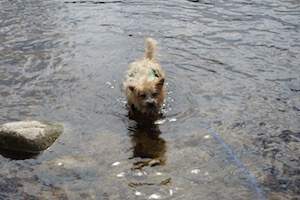