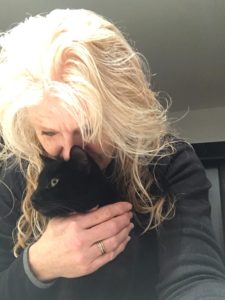 Panther … the coolest cat in the world, who helped heal my heart, who gave so much love, so much joy … who just wanted a home, a place where he would be loved, be important, be taken care of. He was such a chilled out dude, and he loved having a home to call his very own, a home of peace, calm, and love, where he could relax. This was where he wanted to be.

Panther walked into our lives 13th April 2018 … And on the 6th of January this year … he was hit by a car and killed.

I did not put anything on facebook because my heart was broken … shattered into thousands of pieces … Grief so deep I could barely speak.

I told my family, my loved ones, but no one else. We shared our grief together. 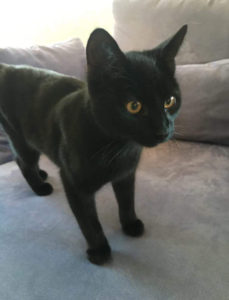 The day he walked into our lives …

And from Panther himself, I could ‘feel’ “Ooops” … I guess he thought the car would stop or slow down. It didn’t. The next two cars did, and one person held up traffic, while the other moved Panther’s body to the side of the road and called me. I went running out of the house …

Panther is buried in our garden, with a cross and wrought-iron flower art work on the fence above his body’s resting place.

As I buried Panther’s body, I talked to him, I prayed, I thanked him for the time we had shared, for the time he had been a cherished member of our family. And I asked if he would please walk with me for the rest of my life, but only if he wanted to. I told him I never wanted to be without him, but I would respect whatever he wanted to do. I told him how perfect a being he was, how he had been the perfect wee boy. 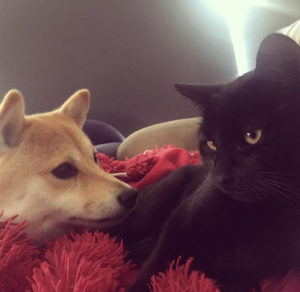 Evie absolutely adored Panther from the moment they met.

And I knew he wanted to walk with me, that this would be another adventure. He loved his adventures. Every day, every walk, every excursion was an adventure for him. And so now he gets to walk a new adventure, in non-physical form.

I did not put anything on facebook because I could not handle responses without falling apart again. I decided I would take one month …

Another reason I chose to delay putting anything on fabcebook (and my blog) … if anyone had said ‘his time had come’, ‘it was meant to be’ ‘it was his soul’s choice’ ‘this was in his soul contract’, or even if they had said ‘I have called in the Angels and he is in their care’ … I would have un-friended you immediately and blocked you permanently, and I still will. I am absolutely serious on that. Why, because the clear message I got from Panther that evening was “ooops” … he did not mean for his physical life to end, and it was not meant to be. It was an accident. (I really don’t care what you believe and what your ‘truth’ is, and I ask you to respect that there are many truths, and I know the truth in this matter.) And for anyone to call for Angels to take him into their care … would have been in direct opposition to what was already underway. 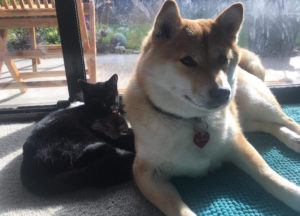 Evie and her little brother, Panther.

The matter was between Panther and I. No one else. And that is why I told no one but family. You see … Panther was no ordinary cat … and something new was underway.

If you have read work from Abraham Hicks (via Esther Hicks) you will have read that death is merely the move from physical to non-physical and that is the only change … from physical to non-physical. Over the last year, since reading that myself, and understanding it deeply, I had shared that with many people, and so now, I had to face and embrace that myself. I had to work my way through everything to open myself to that. Panther and I shared a special bond, and he gave me one week to grieve, and then I had to get on with everything in my life. But in that week I committed to feeling him, hearing him, sensing him. I consulted an animal communicator who confirmed that yes he would walk with me, I contacted a Life Coach I had worked with and she too confirmed he will walk with. 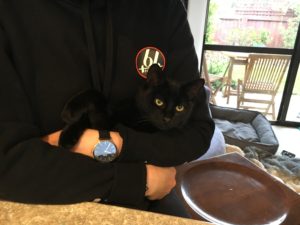 For this past month I dedicated myself to feeling, sensing, hearing Panther, and I will continue that dedication.

If I had shared too much too soon, people would have interfered, though they would have meant well, and the process underway would have been upset. This was between Panther and I. He does not need Angels to take him into their care, he has chosen to walk with me. He does not need to go to the Cat Planet, because he is choosing to be here. He is with me because I asked, and because he wants to be. It is his free choice, because I asked him to do this only if he wanted to.

He has shared with me how it felt to have been physically here, a part of this family and he was so perfectly at peace because this was his home and he loved it so much. 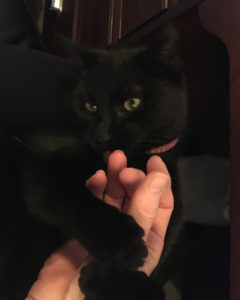 He loved to hang out here, lie in the sun, be with the dogs and humans. And when I held him in my arms, like a baby, her felt so very very safe, and so loved and cherished, right there in my heart energy, and he would go to sleep. He loved sleeping on the bed, because it was soft and comfy, but was equally comfortable on the couch or in the pet beds. He always tapped my hand when I put his food down, to say thank you, he was always so grateful.

Now when I head off to work, with Axel, on the bike, instead of watching us go, Panther runs along side us! And when we get to a busy road, he leaps up and rides on my backpack. And at work he is there. When we (Axel and I) go for morning walks Panther is there too. He even joked one morning, as I was trying to teach Axel to walk nicely on the lead, that cats are so much smarter because they don’t need to be taught how to walk! One day, when I was very sad and missing his presence so much, he said that ‘you cannot undo what has been done’ and he also pushed me to embrace the truth, that

just because something is not physical does not mean it is not real. 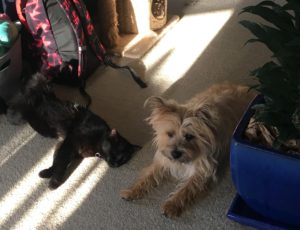 My boys … Panther and Axel.

And so I have a cat in Soul form who walks with me. And I rejoice in our bond. Don’t get me wrong, his physical presence has been so sorely missed. He was the smallest member of the family, but was the most talkative, and without him, the house is quiet, and though he was the smallest he had the biggest presence. He loved everyone! He did not like drama or hassle … he was chilled out.

He was 2 years and 2 months only when he died, and had been a part of our family for only 1 year and 9 months. But he was so utterly cherished and loved and cared for in the time we shared together.

In the time since he moved to non-physical I have embraced our new relationship, and as a result I have experienced so much growth. The gift within his death … this growth … it grew from our unconditional love for each other. 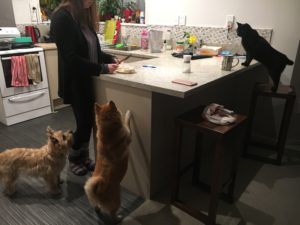 He loved watching anyone prepare food.

I share what has happened with you, only so that you do not wonder why I no longer post pictures of him, or mention him.

Panther was a legend! He still is! And now he comes everywhere with me! No longer does he get left behind. Our adventures continue. He has had many new experiences in our new ability to be together always. He has ridden on my shoulder to Sumner Beach, and watched a sunrise, then come with me up the hills and looked out over the city. He has hung out with us at the shop, and watched people and their energies come and go.

He is still protective of my energy, and observes everything.

There will be no Rest In Peace for Panther … there are adventures to be had little buddy!!! 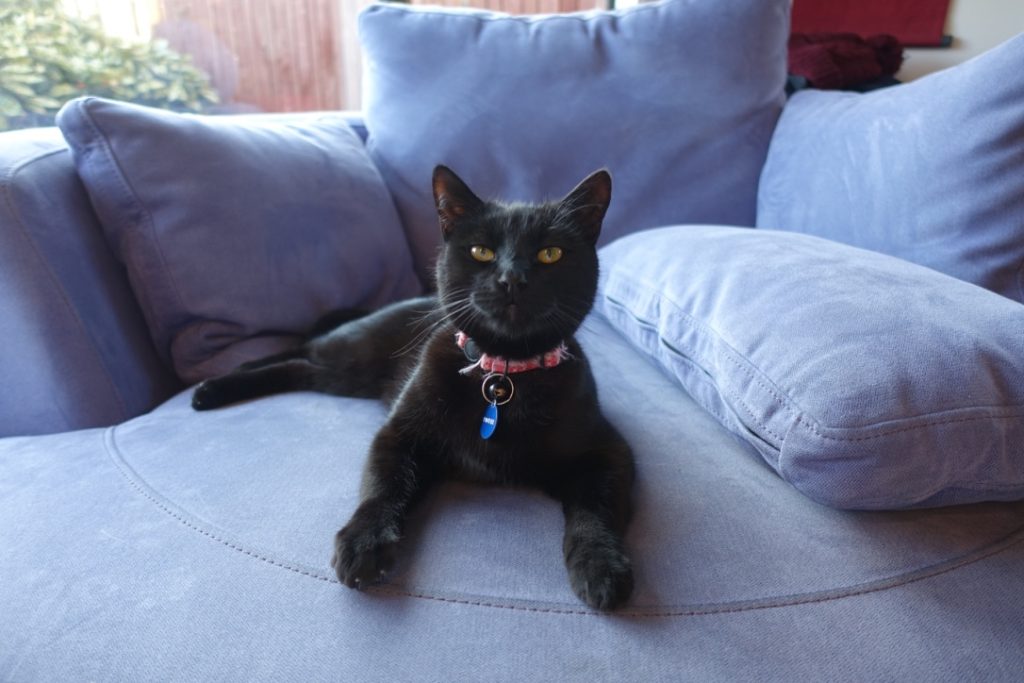