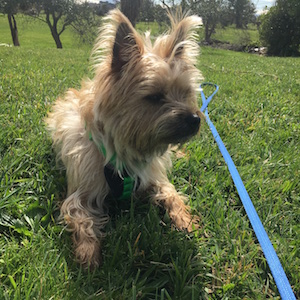 One day you make progress, and you have a good ten metres when your dog walks with the leash loose! No pulling! Loose leash walking. Hooray!!!

Two days later, he loses the plot when he sees another dog, and there is no escape from the situation! Once we are able to move on, he won’t respond to anything, and is pulling harder than ever on the leash.

… We were up in the bark garden (on the pathway towards Pioneer Stadium) so Axel can sniff around. And then along the pathway came a lady and her small dog, off leash. He stopped to sniff something and she walked on. I started to toss some extra treats for Axel to keep him focussed, trusting that the lady and her dog would move on fairly quickly. But the dog stayed sniffing, and eating something. She stopped ten metres away and looked back, waiting for him. He continued sniffing, she waited, and still he was eating something in the grass. Time was passing, and now Axel had picked up the scent, and he knew there was a dog. I tried to distract him with treats but he was oblivious! I called out and asked her to please move her dog on as I could not move my dog. She did not respond, but she did walk back to her dog and waited at his side. I called out again, and again, and she must have been deaf because she did not respond. Axel was getting wound up. And then another dog came along, a border collie, all well behaved like the lady’s dog (I was so jealous!) and they stopped for a chat. I called out to him and he heard me and they both finally moved on.

But, by now Axel was beyond help! He was pulling on the lead harder than ever, would not respond to anything, and I just felt so discouraged. We turned around, and went home.

It was not a nice walk. I came home not even able to speak. I felt so discouraged, so demoralised, so down. Will my dog ever be able to walk nicely on a leash? Will he ever behave okay when he sees another dog? Is he completely un-trainable? Am I the worst dog owner, ever?

Later on I decided to simply accept that Axel is who Axel is, and though he is making improvements he just is who he is on the day, or even in that hour. It’s him. The good, the bad and the ugly … it’s him. It’s who he is in those moments, minutes, hours. But it’s not a permanent state of being for him, any more than I am an identical copy of myself day after day—I’m not. I will continue to work with him, and build our communication language. 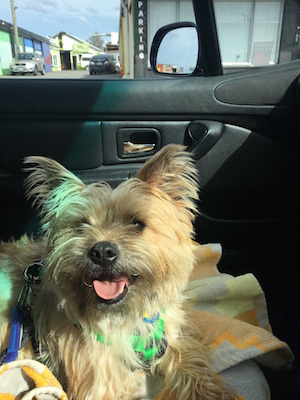 So happy after his long walk …

Axel is who Axel is … and like any child, he is learning and growing.

What he needs, like any child, is love and support, and someone who believes in him. It’s not easy being a good dog parent. But, I don’t want him to be a dog that gets shut in the backyard, never gets to go anywhere, and is fed and ignored. I want him to be a part of my life, and for us to have adventures, and to have adventures with friends too! So … patience, love, support.

And I hope that he will forgive me for the times I get so frustrated that I just don’t know what to do!

It is going to take time, and commitment, but I know that Axel has a lot of potential.

After work Axel and I went to an area of the city where I could let him have more room, the full extent of the 5 metre lead, and he got to walk and smell and stretch himself out. It was great. It was what we both needed.

A friend posted a link to an article about Decompression Walks, and it described it perfectly, and that is exactly what we had … a decompression walk. I even stopped and sat on the grass in the sun, and tossed treats for Axel to go find in the grass.

The following morning … with no pressure, and just acceptance, and a commitment to continue to work with him and train him, the walk was much more peaceful. We avoided the park, and stuck to a pavement walk where I could see ahead and behind for other dogs. He sniffed gardens, trees, lampposts, grass verge, and had a good old time. I tossed treats in the grass, practised games and recall. He did well. In fact, I decided we would walk further, because it was such a beautiful morning, but as soon as he started pulling harder on the lead, we turned around and came home. No drama, just ‘this way’ and off we went.

Have I given up? No. I have lowered my expectations into something more achievable for Axel. I set the bar too high. I wanted a dog that could be trusted off leash, one that walked at my side with beautiful manners, and one that was good with other dogs. I set my own expectations on him … and that was not fair. I have only had him for three months, and he already had two and a half years in a different home with a different family. So … slowly … patiently … with love … and if it seems he has a set back, just accept that that is where he is in that hour. And move on.

I think we often think having a dog is easy. It’s not, and part of that is because we don’t speak each other’s language. We expect them to understand us, but we have to work on that communication, and find ways to understand what each other is saying. Teach each other, and be open to learning.

(My cat was a walk in the park, a breeze, but, then again, he is a very special, chilled out relaxed dude, who just wanted a home and love—and medical attention!)

Perhaps one of my biggest problems is I know so little about dogs. I am blessed to have my friend, Tania, who has shared so much with me, and given me so much guidance and inspiration. When I have a problem I am able to go her and ask for advice. She is there to help every time. Her own relationship with her dog, and previous dogs, has inspired me too, but it has only been in adopting Axel that I have truly begun to know the beauty of the real potential in a canine friendship. In understanding him I am slowing down areas of my life, and that is exactly what I needed to do. I am also learning to be more accepting of situations that life presents me with.

Axel is a remarkable dog. Panther is a remarkable cat. It is my intent that all three of us reach more of our potential. That can only be done through love, faith, trust, patience, time, and commitment. I hope that, along the way, I can inspire many other people in their own lives, and also inspire people to take the time to enrich their own understanding of the animals in their lives.