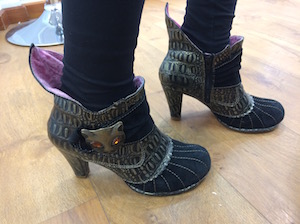 I said to someone, about 6 weeks ago ‘I just can’t find the ground’. And I meant it. I had been through so many life changes, and I couldn’t find any ground beneath my feet—I don’t mean literally! I know what you’re thinking “Were you needing to ‘ground’, Robyn?” Answer: “Yes!” I was certainly not grounded, and have since then been trying to make it a regular practise to ‘ground’. (I say ‘trying’ because some days I forget to do so.)

Once I had mastered the art of grounding, I felt better, I felt more present. Then it was time to address why my life was such a messed up mass of confusion. So … a journey began, one which saw me taking time to get really clear about what I wanted in life.

I am going to admit to a huge bit of arrogance here, and say that I never believed in making 6 months plans or doing vision boards because I figured I never knew what the universe was going to throw up in my path, and so I left it to the universe to sort things out. Now I get it. I realise that the universe responds to what I am focussing on—the cycle of energy flowing. And so I finally got it: if I am clear about what I want to create in my life, really clear, not a whole bunch of ‘wouldn’t it be nice if…’, not a whole bunch of confused thoughts that change day to day, but really clear, then the universe sees that, feels that, and responds to that!!! How could I have ben so arrogant and foolish as to have not understood that before. (I never claimed to be perfect!) So now I am working on vision boards for several areas of my life, that I want to grow and develop. I have started with lots of scrawling and ideas flowing, and adding to it, and reworking my thoughts, and clarifying it all. When I have got that right, then I will create a beautiful vision board, and show that to the universe, trust them with it, and surrender it all. And then I will get on with my life and look at those vision boards every day, knowing it is all coming together, yet also totally unattached to it. There may, along the way, be another opportunity that adds to what I have created, or alters it in some way, but I know that so long as I am clear then it will all be in line with my highest good.

You would expect to see ‘Manifesting Abundance’ written all over my vision boards, right? It’s not … I think I wrote ‘pay rise’ but heck, who wouldn’t put that out there?! And yet, the art of manifesting abundance is an area that people sometimes  get obsessed with. Abundance can come in many forms from many seemingly random directions. To give a small example: I, as well as being a writer, am blessed to work in a metaphysical retail store, and one day, not long ago, a customer (who I had never met before) commented on my green boots—I have a bit of a reputation for my beautiful, stylish, and sometimes flamboyant, boots—and she asked what size I wore, then said she would come in the following week with a pair of black boots. Her daughter was having a throw out, and there was a black pair of boots that this lady thought I might like. She returned the next week, and … Wow! The boots were so freakin amazing! (see pic) Then a few days later another customer, a regular, came in, and we were chatting about feng shui (about which I know nothing), and she said she will come back in a week or two week with a jade plant for me that she has grown from another one. Wow!

I care about people, and I care about all the work that I do, so I try to give my best to people, I am kind, I try to be of service in the best way I can, and this was an example of the cycle of flow. Boots and a pot plant. Abundance and the cycle of flow … This is how life works. I have witnessed it and so, as The Monkeys would sing, ‘I’m a believer!’

I am witnessing life working, and I am getting clear on what I want, but this is such a personal internal journey. The only way I can ever know my Self is to walk my personal journey, and not get caught up in other stuff and other people—something I have, until now, been pretty much crap at!

I used to get so caught up in stuff and people—and the fact that I just wrote ‘I used to’ means that I have made progress in healing that part of me. I now observe myself and when I feel those shadow behaviours arising I have the opportunity to pause, reflect, and ask myself if there is more healing to be done. I pause … I don’t react … I reflect … and then choose a behaviour that is in line with who I desire to be.

All of this healing, all of this inner journeying is for one purpose only, for the goal that I truly desire: To find the flow of my Infinite Self … to remain in that flow … to never be swayed out of that flow. To embody that.

Yes, I have lofty goals!!

Set your intentions for magnificence!