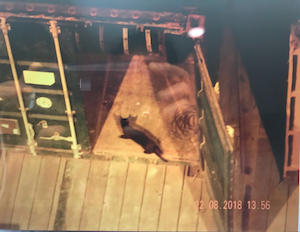 A cat on a ship is not a new thing. There have been cats on ships since Egyptian times. They were considered to bring good
luck, as well as being very good at keeping the mice down!

And so, the story of the black cat on the Fairway, discovered two weeks into the voyage from Singapore to New Zealand, could have had such a happy ending, and been such a great Public Relations opportunity for the ship, the owners of the ship, and the venture it was arriving to perform in New Zealand (the dredging of Lyttelton Harbour.)

The Captain initially told the crew to dispose of the cat, just throw it overboard. The crew refused.

The cat did, however, need to be caged or contained before the ship could dock in New Zealand. The Ministry of Primary Industries informed the Captain that due to biosecurity risks, the ship would not allowed to dock if the cat was not contained. So…a crew member made a cage for the cat, which the crew had been feeding, and had bonded with. He seemed healthy, with a shiny black coat, and was relaxed on board the ship—until he was caged, after than he was not very happy with his circumstances!

Three days before the ship was due to arrive in New Zealand the cat and cage disappeared, and when the crew asked the Captain what had happened, he said it had been disposed of. The crew knew that it had met the fate the Captain first spoke of: thrown over the side of the massive ship. The cat was in the cage and was thrown overboard.

The story of the cat had, of course, been shared by the crew, and so many people had heard about the cat, and the plan was to create a facebook page and raise money for the vet care and quarantine of the cat—assuming it was deemed healthy and did not have any disease which would cause a vet to euthanize the cat—and then find a family to adopt the cat. And then the horrible news that it appeared he had been thrown overboard to drown.

Why? No answers given. Most likely it was considered an inconvenience, too much paper work required.

(Throwing anything over the side of the ship, in international waters, is against the law. They may not be subject to NZ law, since they performed this hideous act outside of our legal limits, but they are most certainly answerable to international law.)

Don’t say “It’s just a cat”, as I have heard some people say, because somewhere we need to draw the line!

If you heard of live sheep being thrown overboard in the high seas, would you stand by and say nothing? A horse with a broken leg, just toss it overboard. A dog? Just throw it in the ocean. A cow? Who care’s anyway, it’s just an animal, right? Wrong.

Where do we draw the line? When do we say “This will not be tolerated!”

We draw that line at the first opportunity. We state “This will not be tolerated!” the first time we ever hear of such an action.

We, the humans, do not own this world. We share it with all of life.

I am standing up and saying: This is not tolerable! I am drawing the line in the sand! This black cat on board a huge ship, deserved merciful treatment and care!

Compare this story to the stowaway cat found on an Emirates flight from Cairo. The airline paid for the vet care and the quarantine, and adoption is already lined up. And the story of the kitten on the oil rig who somehow snuck into a box of food and was flown off the rig by helicopter, and then put into quarantine, and already has an adoption lined up! These were excellent PR stories, and show the heart of the companies involved.

When people unite in love, support, ideas, commitments, great things happen. We have the ability to add our voices, and our prayers, and our actions, and make great changes. But we cannot bury our heads in the sand. This is a time of change, and we have to actively play our part. That is why I contacted The Press, and they ran a front page story. And we (I and others who care) have contacted Dutch Animals Rights since the ship is Dutch owned, and they are contacting the newspapers over there also. And the New Zealand SPCA are investigating. Collective action!